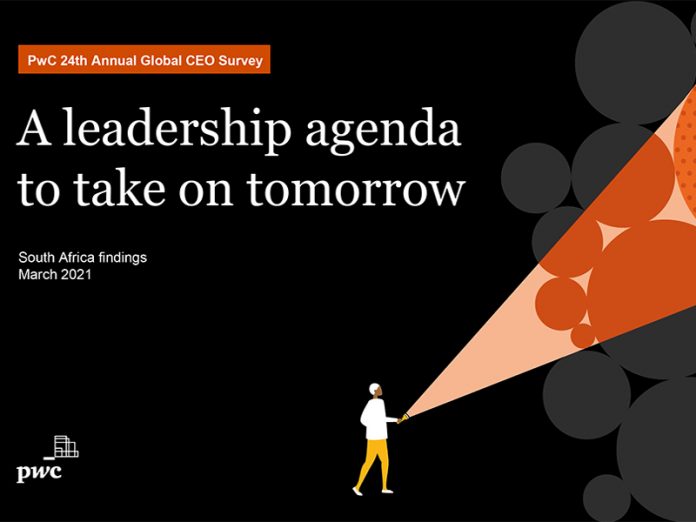 One year after COVID-19 was declared a pandemic, CEOs are voicing record levels of optimism in the global economic recovery, with 76% of global business leaders predicting that economic growth will improve in 2021, this according to the PwC Global Annual CEO Survey, 2021.

Coming off of a global recession (3.5% decline in world GDP) and a GDP contraction of 7% in SA, a record share of CEOs are optimistic about global economic growth this year. The survey polled polled 5 050 CEOs in 100 countries and territories over January and February 2021.

The percentage of CEOs expressing confidence in growth is up from 22% in 2020 and 42% in 2019, representing the highest level of optimism since the survey started asking this question in 2012. In South Africa, 57% of CEOs believe global economic growth will improve over the next 12 months.

South African CEOs are also more optimistic about the outlook for their businesses. Some 41% (compared to 36% globally) of those polled said they are “very confident” about their organisation’s prospects for revenue growth over the next 12 months.

Commenting on the survey results, Dion Shango, CEO of PwC Africa says: “After a year of economic and political uncertainty coupled with human tragedy, it is encouraging to note an upswing in sentiment among CEOs about global economic growth. Although we are not out of the woods, CEOs see a path forward – for the global economy and for their own organisations.

“As business leaders prepare for a rebound in the economy, a critical question will be: which management approaches should business retain from the rapid response mode most of them adopted during 2020?

“Fast, high quality decision-making is likely to continue to be top of most companies’ ‘keep’ lists. Other priorities include ensuring that top management remain focused on the big issues that matter most – engaging with all staff, revisiting critical decisions frequently, and responding early to unintended consequences.”

Industries were affected in different ways by COVID-19 as lockdowns and other restrictions changed the way we work, live, travel and shop. This disparity is reflected in confidence levels, both in our survey results and in our interviews with CEOs. It is notable that CEOs globally in the technology and telecommunications sectors show the highest levels of confidence at 45% and 43%, respectively. Meanwhile, CEOs in the transportation and logistics (29%) and hospitality and leisure (27%) sectors are among the least confident about their ability to grow revenues over the next 12 months.

New political developments and existing tensions have had an impact on the views of US CEOs. They are reducing their emphasis on China as a growth driver and increasing their focus on Canada and Mexico: compared to 2020, US CEOs’ interest in the latter two countries rose by 78%. Meanwhile, China CEOs report growing interest in large economies such as the US, Germany and Japan – prime destinations for exports.

At 17%, Germany holds on to its number three spot on the list of growth destinations, while the UK, post-Brexit, moves up to number four (11%), surpassing India (8%). Japan also rises up the ranking to become the sixth most attractive growth destination, overtaking Australia which held that position last year.

In view of South Africa’s rising inequality and employment challenges, it is concerning that 51% of SA CEOs (compared to 37% globally) report they have reduced staff in the last 12 months and that 41% (compared to 21% globally) plan to do so in the year ahead. The proportion of South African CEOs expecting to reduce staff has exceeded those expecting to increase it for the first time, and by a margin of 25 percentage points. This is unprecedented in the history of the survey. The survey findings are based on the economic outlook at the time, namely, a level 3 lockdown period, issues arising from the rollout of vaccinations, as well as load shedding.

We’ve seen in previous surveys that when the operating environment gets more difficult, CEOs focus on areas in which they can have a direct impact while limiting risk. Operational efficiencies (South Africa: 89%; Global: 77%) and organic growth (South Africa: 70%; Global: 73%) top the list of CEOs’ actions planned to drive growth. In addition, 41% of South African CEOs (compared to 38% globally) also intend pursuing mergers and acquisitions, while 35% of CEOs both in South Africa and globally are looking for a new strategic alliance or joint venture.

In the year of COP26, climate change is not being approached with urgency

The percentage of global CEOs expressing concerns about climate change has risen from 24% in 2020 to 30% in 2021. This represents only a marginal increase in the context of COP26 (the 26th UN Climate Change Conference of the Parties) which is being held this year in Glasgow, UK. The finding also comes in the context of rising anxiety about nearly all types of threats.

Climate change still only ranks ninth among CEOs’ perceived threats to growth. Furthermore, another 27% of CEOs report being “not concerned at all” or “not very concerned” about climate change. This may be because climate change is not seen as an immediate threat to growth compared to other issues such as the pandemic, over-regulation and cyber threats.

It is notable that 27% of South African CEOs report not being concerned about climate change; and 49% of CEOs (Global: 60%) have not factored it into their strategic risk management activities.

At a country level, CEOs in countries with high exposure to natural hazards such as India and China are some of the least prepared for climate change risk.

Shirley Machaba, CEO for PwC Southern Africa adds: “The COVID-19 pandemic has provided the world with a real opportunity to make a change and realise governments’ ambitions to transition from a low carbon global economy. This has provided South Africa with an opportunity to achieve its ambition of achieving a just transition to a low carbon economy as set out in the National Development Plan (NDP). This opportunity was also recognised by the Government at the virtual High-Level Meeting of the United Nations Sustainable Development Goals Moment in 2020.”

Not surprisingly, pandemics and health crises top the list of threats to growth prospects, overtaking the fear of over-regulation, which has been the perennial number one concern for CEOs globally since 2014. Among South African CEOs concerns about the impact of unemployment on their companies’ growth prospects have risen four places (South Africa: 73%; Global: 21%) to become the top threat to business growth.

Rising digitisation is increasing the risks posed by cyber threats. This, coupled with the significant increase in cybersecurity incidents in 2020, including ransomware attacks, has resulted in cyber threats leaping up the list to become the number two concern, with the level of concern jumping from 33% to 47% globally, and from 22% to 49% in South Africa. Cyber threats are a concern particularly for CEOs in North America and Western Europe, where they are considered a greater threat than the pandemic.

In 2020, tax policy uncertainty ranked outside the top ten concerns for CEOs, with only 19% of CEOs concerned. This year, it has increased rapidly in importance, leaping up to seventh place (31%), with CEOs undoubtedly watching government debts accumulate and realising that business taxes will likely need to rise.

When asked which threats are explicitly factored into their strategic risk management activities, South African CEOs are significantly more responsive than their global peers about managing threats, most notably around skills shortages, cyber threats and the pandemic and health situation.

Machaba comments:“Upskilling or reskilling employees to enable their full participation in the workforce means creating more inclusive and sustainable economies and societies that pull people along and catalyse deeper connections between humanity and the economic marketplace.”

Digital investments for the future

Asked about their spending on digital transformation, nearly half of CEOs (49%) project significant increases of 10% or more. Despite the rising level of concern CEOs are voicing about cyberattacks, this has not translated into definitive actions. Less than half of the CEOs planning for heightened digital investment are also planning to boost their spending on cybersecurity and data privacy by 10% or more.

More than half of South African CEOs (59%) plan to pursue greater cost efficiencies and increase their rate of digital investment by 10% or more.

While many CEOs are planning to reduce their workforces and focus on technology to drive growth in their businesses, it is heartening that 49% globally are also planning to increase spending on leadership and talent development.

Shango concludes: “Looking at the survey findings we see an opportunity emerge – a moment for business leaders to take a step back and ask how we can do things better. Although the shape of the recovery remains unknown, we cannot go back to the way things were before. To bring about the change that is needed, company leaders will need to think differently and constantly evaluate their decisions and actions against broader societal impacts. 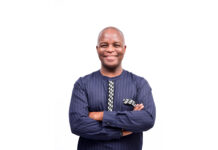 Made in Africa: Igniting African business 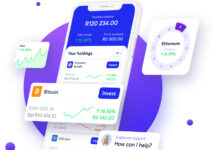 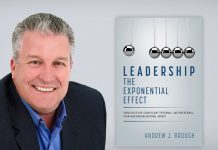 A quick look at Turnover Tax and SBC Tax

Made in Africa: Igniting African business

Getting through a business recession

Leaders listen – how good is your listening skills?

ABOUT US
Dynamic digital platforms that gets straight to the heart of business matters.
Contact us: lynette@bizmag.co.za
FOLLOW US
© 2018 Your Business Magazine
MORE STORIES